Diversifying the ways that the barnacle repelling active agent, Selektope® can be used in marine coatings marks the passing of a significant milestone for I-Tech chemists innovating to support the future proofing of antifouling coating performance as biofouling pressures increase due to warming oceanic temperatures.

I-Tech AB, the developers of the antifouling biotechnology, Selektope® and RISE Research Institutes of Sweden (RISE) have developed a new method for introducing Selektope into marine antifouling coatings, expanding the ways paint manufacturers can work with the unique technology and paving the way for enhanced future hard biofouling prevention.

As the first line of defence against marine biofouling, antifouling coatings must deliver continuous protection against the increasing risk of fouling organisms accumulating on underwater surfaces. For biocidal antifouling coatings, a sustainable release rate of biocidal content across the entire intended lifespan of a coating system is essential for effective biofouling prevention. For large, merchant ships this time period could be up to sixty months.

The success of biocidal coatings is dependent on the sustained control of biocide release at the coating surface. Currently, Selektope is delivered to the surface of self-polishing copolymer (SPC) antifouling coatings due to being held in the coating matrix via electrostatic interactions with metal pigments. This allows Selektope to be evenly dispersed throughout the coating matrix and released at a sustained rate as the paint erodes/polishes.

In the past, superior antifouling efficacy was also achieved when a biocide was attached to a polymer chain with a covalent bond that was hydrolysable upon contact with water. This was the release mechanism that gave tributyltin (TBT)-containing coatings their success before the ban on the use of TBT came into force in 2008. Coupled with a sharp decrease in the number of approved biocides for use in antifouling coatings in the EU in the past decade, the realisation of antifouling performance using the current biocide toolbox comparative to that achieved by TBT-containing coatings in the past has been tricky. 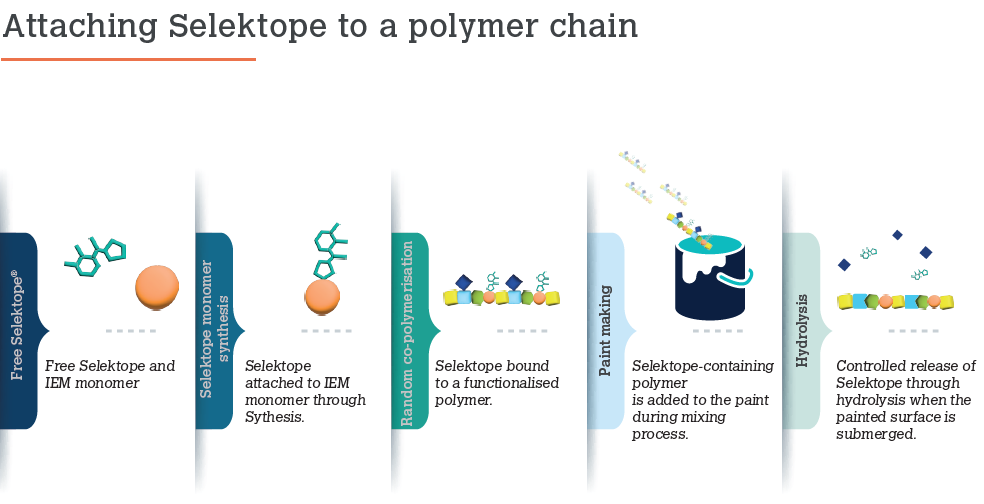 After ten months, the control panel displayed heavy barnacle fouling whereas the panels coated with paints containing Selektope, both introduced via the traditional method and via the new method of attachment to a co-polymer chain, were barnacle-free. This provided proof of concept that attaching Selektope to a co-polymer for use in SPC antifouling coatings is possible.

Dr Dan Isaksson, Research & Application Development Manager at I-Tech comments:
“The successful creation of a Selektope-containing monomer that was then polymerised to create the co-polymer chain with Selektope attached is a significant achievement in the antifouling coatings sector as it expands the antifouling biocide toolbox. This supports the coatings sector in its efforts to innovate around meeting future hard biofouling prevention needs. For these projects the focus was on SPC coatings. Proving this concept in silicone-based foul release coatings will be the next focus for I-Tech.”

These research findings were presented at the recent International Antifouling Conference 2022. Download the technical paper that details the research and field tests undertaken by I-Tech and RISE here: https://bit.ly/3fwxpTU